You Are What You Eat! 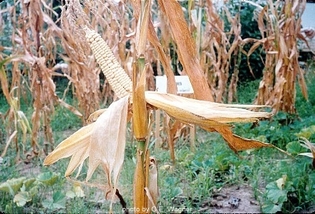 Maybe you’ve heard the saying, "You are what you eat". Archaeology shows the truth to this statement! For example, there are three forms of heavy carbon isotopes, C12, C13, and C14. All three of these may accumulate in the tissues of living organisms (such as humans) through the food they ingest. One of these isotopes, C14, is unstable, meaning that once the organism dies, this isotope begins to degrade. Because it degrades at a known rate, it is commonly used by archaeologists to date organic objects. The other two isotopes, C12 and C13, are stable, meaning that the ratio ingested during life remains the same even thousands of years after death. The sort of photosynthetic pathway a plant follows to form carbon predicts the ratio of C12 to C13 the plant will have in its tissues, or that another organism such as a deer or a human will have in their tissues after eating that plant.

It just so happens that maize, originally a tropical plant, has a different photosynthetic pathway and therefore a different C12/C13 ratio than do most other plants native to eastern North America. The other plants with a similar ratio to maize are not commonly found in the trash at ancient sites, meaning that they were not significant components in the diet. By tracing the change in ratio of the heavy carbon isotopes in human bone, we can trace the rise to importance of maize in the diet of ancient peoples! Thus, although the first archaeological evidence of cob and kernel fragments occurs as early as the Middle Woodland Period, about 1,800 years ago, when the heavy carbon isotope evidence is linked to the quantities of cobs and kernels in the trash we can say that maize was not important in the diet until nearly 1,000 years after it was first introduced into the eastern Woodlands. To find out what people were eating before maize, see "The Three Sisters".