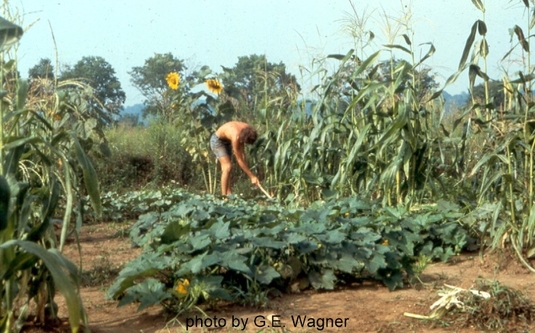 You may be surprised to learn that people have been managing the landscape, and particularly the vegetation, ever since they arrived in the Americas. The virgin forest the Europeans thought they found upon their arrival along the eastern seaboard was actually the result of thousands of years of interaction with and management by Native Americans. Even many archaeologists still mistakenly believe that until maize was cultivated intensively in the centuries just prior to European contact, Indian impact upon the landscape was minimal.

Human influences on vegetation include both deliberate and unintentional effects. Hunter-gatherers as well as agriculturalists were active managers of resources. Human impacts to ecosystems may be grouped under the broad categories of fire, agricultural practices, and woodland use.

For an example of woodland use, let us look at wild hickory trees. By the Middle Archaic period, or by 8,000 years ago, nuts (particularly hickory) had become an important source of food for the non-coastal eastern Indians. Yet, modern ecological studies indicate that the yield of nuts from closed canopy forests can be too low to predictably or economically support humans. Archaeologist Patrick Munson hypothesizes that Indians managed forests to increase the yield of nut trees, and that they have been doing so for thousands of years. You could open up the canopy around hickory trees, for example, by girdling (stripping a ring of bark) unwanted trees and then using low intensity fire to maintain the opening.

Perhaps the most common tool used by the southeastern Indians to structure vegetation was fire. There are many historic accounts telling how Indians set fires to deliberately manipulate vegetation and animals. Fire has been a tool used by Native Americans to sculpt the landscape for thousands of years, resulting in many of the vegetation associations first seen by Europeans and mistakenly thought by them to be entirely Anatural@ or pristine.

In fact, the southeastern pine forests are thought to owe their existence to a fire regime. Historically, when fire has been suppressed in pine forests, forest composition changes and hardwoods become more dominant. However, it can be difficult to tell anthropogenic (human affects) fire regimes apart from natural fire regimes.

The greatest labour they take, is in planting their corne, for the Country naturally is overgrowne with wood. To prepare the ground they bruise the barke of the trees neare the root, then doe they scortch the roots with fire that they grow no more.
The next yeare with a crooked peece of wood they beat up the weeds by the rootes, and in that mould they plant their Corne. Their manner is this. They make a hole in the earth with a sticke, and into it they put foure graines of wheate [maize] and two of beanes. These holes they make foure foote one from another; Their women and children do continually keepe it with weeding, and when it is growne middle high, they hill it about like a hop-yard [Captain John Smith observing farming practices along the Atlantic seaboard in 1607-1608] (Smith 1907:58-59).