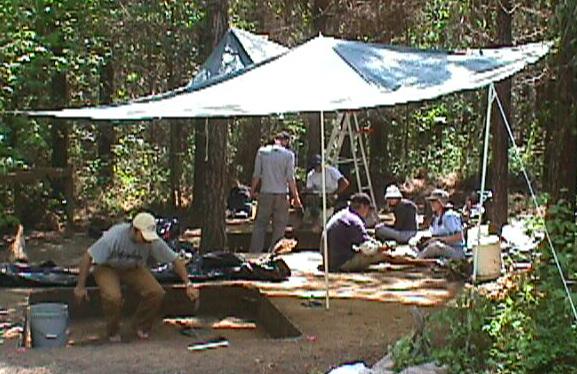 The original scope for the Wateree Archaeological Research Project (WARP) was described by Ferguson and Green (1984b:1) as follows: "The project is designed to investigate human-land relationships in the Wateree River Valley utilizing a wide range of approaches including anthropology, archaeology, geography, history, folklore as well as the natural sciences." As originally envisioned, the project would focus on the entire Wateree Valley, from initial occupation through the present time.  However, it was not until 1998 that concerted survey and testing took place at Wateree Valley sites other than Mulberry.
In 1998, Gail Wagner (Department of Anthropology) and Chris Judge (Department of Natural Resources Heritage Trust) as co-principal investigators used matching grants to survey, map, and test the Mulberry site and two other nearby mound/town sites along the Wateree River, the Adamson site and the Belmont Neck site.  The fieldwork in 1998 (directed by John Cable) resulted in clarification of the ceramic chronology for the Wateree Valley, a fresh assessment of site sizes and integrity, topographic maps of each site, and a summary of plant use through time in central South Carolina.
The plan is to continue to elucidate the history and lifeways of the Late Woodland and especially the Mississippian period people who occupied the Wateree Valley, through the frameworks of human-landscape interactions and foodways.