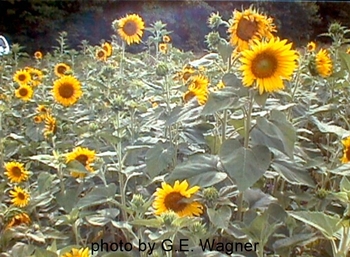 (The Three Sisters)
The earliest presumed domesticate discovered in eastern North America is the bottle gourd (Lagenaria siceraria), dating to 7,000 years ago at a wet site in east-central Florida. Evidence for use of a gourd-like squash (Cucurbita pepo subspecies ovifera) with a thin, hard rind and probably bitter flesh (but edible seeds) is also found at this time in west-central Illinois. By
virtue of morphological studies and genetic testing, early (Middle Archaic Period) squashes are thought to have been growing wild locally and were not the domesticates imported later from Mexico. Interestingly, the bottle gourd is considered to be a native of Africa that floated naturally on ocean currents to land on beaches in the Americas. Experimentation demonstrates that the hard shell may remain impervious to seawater long enough to allow the currents to complete the trip.

In other words, experimentation with planting and maintaining crops was occurring by the Middle Archaic Period, with native domesticates developed by the Late Archaic (see "Weeds Vs. Domesticates"). The two oily seeded plants, sumpweed (Iva annua variety macrocarpa) and sunflower (Helianthus annuus), are present in domesticated form by the Late Archaic, or by 3,000-4,000 years ago. By this time, pepo squash and bottle gourd are fairly widespread at eastern sites, and the first domesticated chenopod (Chenopodium berlandieri subspecies jonesianum) is found at sites in Kentucky and Arkansas. A crop locally important in the Midwest at this time is giant ragweed (Ambrosia trifida), although it was never domesticated.
Another cultivated but not domesticated crop that appears by 3,000 years ago is maygrass (Phalaris caroliniana), grown for its starchy seeds available by late spring/early summer.

By the Late Archaic Period, or 2,500 years ago, people’s diets were rich in the  starchy seeds of chenopod and maygrass, the oily seeds of sumpweed and sunflower, as well as in domesticated pepo squash. Erect knotweed (Polygonum
erectum) was another cultivated starchy seed that rose to dietary importance during the Woodland period in parts of the Midwest. Little barley (Hordeum pusillum), a spring/early summer starchy-seeded weed associated with maygrass, is frequently found in the same deposits.
By the Middle Woodland Period, or about 2,000 years ago, Indians from the Upper Midwest down to Tennessee were farmers who grew the starchy seed complex (chenopod, maygrass, little barley, and sometimes erect knotweed), pepo squash, bottle gourd, and the oily seeds of sumpweed and sunflower. With this agricultural system well in place, no change can be discerned when maize (Zea mays) was added by 1,850 years ago (see "You Are What You Eat"). It took hundreds of years for maize to become established as an important item in the diet (see "Uses Change Through Time"). Tobacco (Nicotiana species), which was introduced at about the same time, probably arrived via a different route than did maize.
Between about 800-1,200 years ago, maize production intensified and use of the native starchy seeded crops began to diminish. About this time, domesticated beans (Phaseolus vulgaris) were introduced, probably from the Southwest.
Whereas beans were eagerly adopted in some areas of the east, such as along the Ohio River, in other areas they appear to have played a minor role until just before European contact. Only two other domesticated crops spread into the east
prior to European contact – pale-seeded amaranth (Amaranthus hypochondriacus) and cushaw squash (Cucurbita argyrosperma). Their use is neither widespread nor major.

Sometime between 700-300 years ago, the starchy seed complex of chenopod, maygrass, and little barley, along with the oily seeded sumpweed fell out of use and our domesticated forms of chenopod and sumpweed went extinct. The maize, beans, squash, sunflower, and tobacco first domesticated by the Indians were adopted by European settlers, and the rest, as they say, is history.

Their Usal Grain which they make use of is the Indian Corn as being best Adapted to the Soil and Climate besides which they have Generally 3 Crops in that one; for first they plant the Corn five of which grains they put in a hole which holes are made in Rows and Cross Each other at right angles which when they Hoo the Corn they Carry in a Double Pocket or Bagg a Quantity of Kidney Beans and Pumkin seeds of which they throw in 3 of Each and Gather the mould together with their Hoo like our Hop Hills; Thus have they 3 Crops in the Ground at once, that when the Corn comes to Shoot up into Large Stalks the Kidney Beans Lay hold of them with their Claspers and run up with it while the Pumpkins Shoot out their Vines through all the Intermediate Spaces below. The Beans are usally gathered when they Top the Stalks of the Corn . . . [captive English
soldier, along the New England coast in 1748]. (Calder 1935:133-134)

© Gail E. Wagner, 2014. The views and opinions expressed in this page are strictly those of the page author. The contents of the page have not been reviewed or approved by the University of South Carolina. Page last updated 16 Sept. 2014.