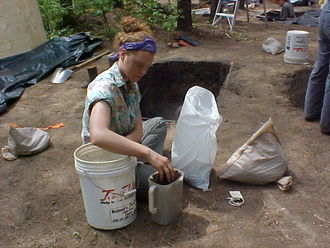 What Can You Learn From Trash?

Archaeologists specialize in trash. When we sift through an archaeological site, what we commonly recover is the trash that people left behind. Even so, finding plant remains requires special procedures. Since plants are organic, most fruits, nuts, or seeds thrown away as trash or simply lost in the grass or leaf litter will rot long before an archaeologist has a chance to find them. What, then, do archaeologists find and how can they talk about what people used to eat thousands of years ago?

Three basic kinds of plant remains may be preserved at archaeological sites. Pollen, the product of flowers, has a tough coat that allows for preservation. Phytoliths, miniature silica skeletons that form in plant cells, likewise are tough as rock (see "Pollen and Phytoliths"). What I’ll talk about here are macrobotanical remains such as wood, nuts, seeds, stems, and leaves.

Only those macroremains that are desiccated, waterlogged, or charred are commonly preserved at archaeological sites. Under extremely dry or wet conditions, organic remains do not rot or rot very slowly. Thus, even 10,000-year old leaves may be preserved under the overhang of a dry rockshelter or in a dry cave. The earliest bottle gourd rind so far recovered from eastern North America was preserved for 7,000 years because it was consistently waterlogged in an anaerobic environment. Charcoal, the product of charring, is relatively inert and may also preserve the anatomical structure of the original plant part. By far the vast majority of plant remains reported by archaeologists have been preserved by charring.

Of course, the ancient peoples did not deliberately char plant remains for archaeologists to find! In parching, boiling, simmering, roasting, baking or otherwise preparing food, accidents occurred. The seeds dropped into the hearth or the burnt dinner became part of the trash that archaeologists recover. But even though plant remains may be preserved in the archaeological record, they cannot be recovered systematically by shoveling or even by troweling. An archaeologist recovers pollen or phytoliths by taking small bags of dirt back to the laboratory, where strong chemicals are used to remove all except the pollen or phytoliths. Macrobotanical remains are recovered through flotation, in which a large bag of dirt is dumped into a screen-bottomed container immersed in a tank of liquid (usually water). While the dirt sifts through the bottom of the screen, the small, fragile charred plant remains float to the surface of the water where they may be recovered. Heavier charred plant remains sink to be caught in the fine-mesh screen underneath. The screen that can be used in flotation is much smaller than the screens otherwise used by archaeologists to sift their dirt.
5. The  paleoethnobotanist (an archaeologist specializing in the  identification and interpretation of plant remains) maintains a modern comparative collection of nuts, seeds, stems, wood, etc. in order to be able to identify the archaeological specimens recovered. Because most the archaeological plant remains are charred, the paleoethnobotanist frequently chars samples of her comparative collection! He/she uses a microscope to compare the modern and ancient specimens. Even specimens 10,000 years old are likely to be the same species or closely related to those that grow today.

By comparison, a paleobotanist is a botanist who studies plant fossils or mineralized plants that may be millions of year old,  predating the beginnings of humankind.
© Gail E. Wagner, 2014. The views and opinions expressed in this page are strictly those of the page author. The contents of the page have not been reviewed or approved by the University of South Carolina. Page last updated 13 Sept. 2014.