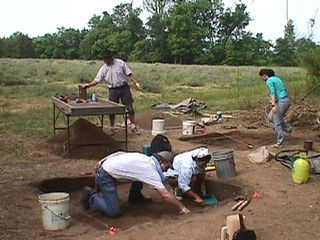 Mulberry was visited by Hernando de Soto in 1540 and by other Spanish and English explorers through 1670.  In 1806 as many as ten mounds were observed, but now only two are visible.  Some of the mounds would have been flat-topped with a temple or public (rather than private) structure on top.

The Mulberry site is located on the present-day historic Mulberry Plantation.  Excavations at this and other sites on the property have been initiated and supported by the owners of the property.

The first archaeological excavations were undertaken by the mound division of the Bureau of American Ethnology in the spring of 1891.  Only sketchy notes remain of this early exploration, since the field director died before finishing his excavation!  Two of the mounds were trenched.  No further work was done at the site until 1952, when A.R. Kelly at the University of Georgia along with support from the Charleston Museum undertook to profile Mound A, which had long been eroding into the river, and to uncover a portion of the village to the south of the mounds.  No further archaeological explorations occurred for 21 years, although in 1970 a portion of the site was placed on the National Register of Historic Places.

It was not until archaeologists were established at the University of South Carolina that a concerted effort was directed toward exploration of this site.  Limited testing in 1973 by Leland G. Ferguson led to the initiation of the Wateree Archaeological Research Project (WARP) in 1979.  From 1979 through 1982, and again in 1985, the Department of Anthropology at the University of South Carolina ran archaeological field schools at the Mulberry site.  During this period, fieldwork was directed by a number of researchers and, until 1985, all work was focused on the area in and adjacent to the mounds.  These early field schools explored site stratigraphy, examined mound construction, looked for paleosurfaces, searched for evidence of historic slave occupation, and established a ceramic chronology.  And, they resulted in six Masters theses on the Mulberry site.

The 1985 field season, directed by Chester DePratter and Joan Gero, was significant in that it initiated the first excavations in a portion of the village distant from the mounds.  It was this area of the village that was the focus of Gail E. Wagner's field research in alternate years from 1990 through 1998.  During this period, the first prehistoric structure (House 1) was uncovered and excavated.  This is not only the first prehistoric structure excavated at this site, it is the first entire structure from any time period in the state of South Carolina!

House 1 is a square structure, 6.6 m on a side, built with single wall post construction except for a narrow, short trench door in the southwest corner.  Like other late prehistoric houses found in surrounding states, the center of the house was an open square delimited by four central support posts.  There appear to be inner partitions as well as benches along the walls, an entry vestibule, and a central puddled clay hearth.  One radiocarbon date places occupation of this structure at about A.D. 1680.  The fact that over 2 kg of mica were recovered from this structure, coupled with its location near the edge of town, indicates it was a workshop where mica was fashioned into finished products (Wagner 1998b).  Finished mica products such as oval to round disks with central cut-out crosses were sewn onto the clothing of only certain elites.

During the 2000 and 2002 field season, a portion of a stockade around the mound precinct was located.  The inhabitants dug a flat-bottomed wall trench into midden.  Later midden accumulated only on the mound side of the wooden wall erected in the wall trench.  We believe we located the remnants of Mound C (bulldozed into the creek in the 1950s).  Finally, another structure was found within the mound precinct.

Above, the crew for the 2000 Field season, with Mounds A and B in the background.
© Gail E. Wagner, 2014. The views and opinions expressed in this page are strictly those of the page author. The contents of the page have not been reviewed or approved by the University of South Carolina. Page last updated 13 Sept. 2014.